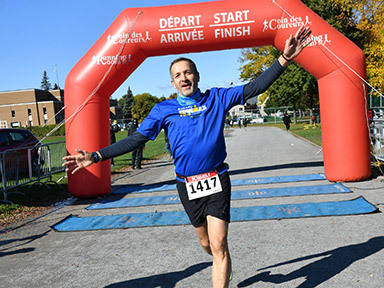 A beautiful day. A poignant Event.

Montreal, QC., Oct. 22, 2021 - The Cedars Cancer Foundation is proud to announce that the 6th Annual Cedars Run for Ovarian Cancer successfully raised in excess of $130,000. The event took place on Sunday, October 17th in Town of Mount Royal and attracted over 320 participants.

Dominique Dagenais, Founder of the Dagenais Joly-Smith Fund, addressed the crowd under a beautifully sunny sky and stated, “this is a magnificent day compared to yesterday when I felt completely discouraged.” Dominique and her family’s goal is to give ovarian cancer patients a second chance at life. They are quick to let everyone know how eternally grateful they are to Dr. Gilbert and her amazing medical team for the treatment and care they provided her in her time of need.

“We are incredibly grateful to the Town of Mount Royal for allowing us to once again host this event in the center of their beautiful town” said Jeff J. Shamie, President and CEO of the Cedars Cancer Foundation. The 6th Annual Cedars Run for Ovarian Cancer held a special meaning this year, as it honored and memorialized Dr. Kris Jardon, a skilled a skilled surgeon and compassionate gynecologic oncology physician who passed away from cancer in early 2021. “We are honored to have known him and we are grateful for this opportunity to commemorate him at an event he so avidly supported,” said Mr. Shamie.

Dr. Lucy Gilbert, Director of Gynecologic Cancer Services at the MUHC and professor of Obstetrics, Gynecology and Oncology at McGill University, was later joined by colleagues Dr. Xing Zeng, Obstetrician and Gynecologist and Joelle Malek, Nurse Manager of the DOvEEgene Project, to commemorate the late Dr. Kris Jardon. Their heartfelt words captivated everyone in attendance, including some who had personally been treated by Dr. Jardon.

The Dr. Kris Jardon Memorial Trophy, introduced for the first time this year, will be presented annually to the winner of the 10k run. On this inaugural occasion, the trophy was awarded to two co-winners of the 10k run - coincidentally Dr. Jardon’s best friends, Stephane Calixte and Etienne Allonier. The late doctor’s children, Samuel and Hannah Jardon, presented the trophy to the winners, making the award ceremony that much more meaningful to both the winners and everyone in the audience.

Ovarian cancer is the fifth most common cancer for women and one of the most serious. Dr. Lucy Gilbert has made it her life mission to find a cure for ovarian cancer. Dr. Gilbert has previously stated that “if a cancer can be detected early, it can be cured.” And she stands fast in her belief that “there has been virtually no improvement in the early diagnosis or cure rate of ovarian cancer. It’s just not acceptable.”

Founded in 2016 by Dominique Dagenais and her son, Max Joly-Smith, the Annual Cedars Run for Ovarian Cancer raises vital funds and awareness for Dr. Lucy Gilbert’s DOvEEgene project. The DOvEEgene project brings screening of ovarian and endometrial cancers one step further with the new genomic uterine pap test, DOvEEgene test, developed by Dr. Gilbert and her team of McGill researchers; it provides a safe and minimally invasive method for earlier diagnosis of ovarian and endometrial cancers. The DOvEEgene Project is committed to raising awareness of Ovarian & Endometrial cancers, advocating for early diagnostic testing, and supporting ovarian cancer patients and their families.